It was a very memorable and unforgettable experience 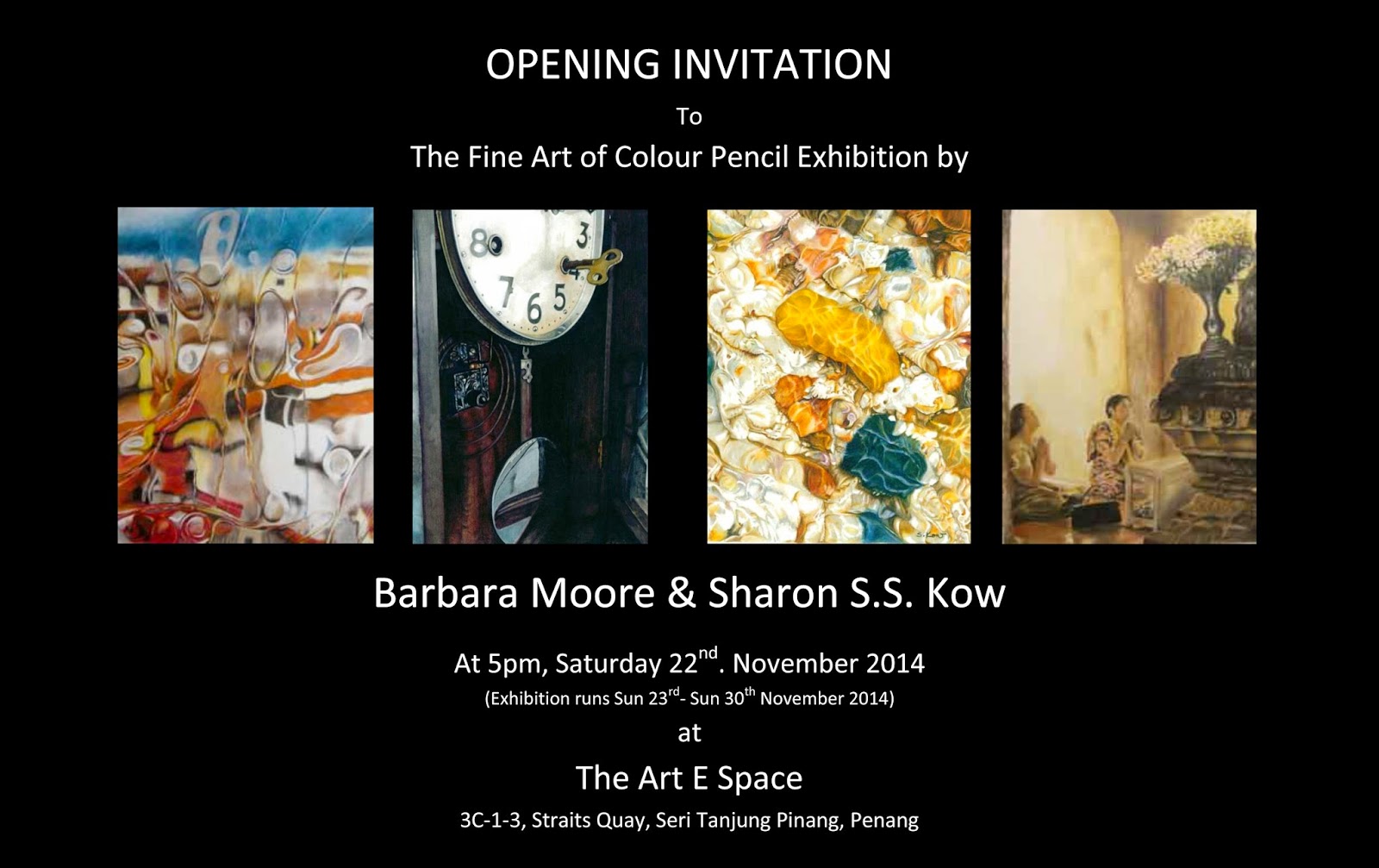 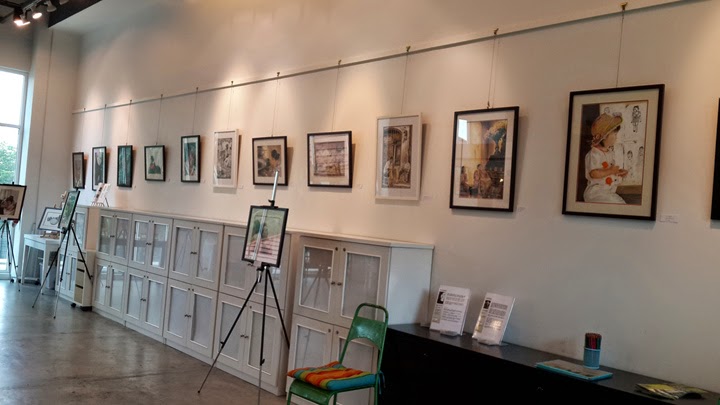 The Fine Art of Colour Pencil exhibition was held in The ArtESpace www.theartespace.com, Straits Quay, Penang on the 23rd to the 30th of November 2014.

This exhibition was a collaboration between myself and Barbara Moore https://www.facebook.com/BarbaraMOOREart/,  a Canadian born artist currently residing on the Penang island.

Up till today, I still could not believe I did an exhibition of my art work in 2014. It was a very memorable and unforgettable experience because Barbara and I both organised the exhibition all on our own.

Barbara came up with the idea of doing an exhibition early 2014. When she suggested the idea to me, I was very reluctant because I was not at all prepared and the idea of doing an exhibition has not occurred to me. I have very limited pieces of art since I have only started in 2013 and I do not think that any gallery or art curator will be interested in my colour pencil art and my artwork do not have a theme going, whereas Barbara has produced so many artwork in many medium. So compared to her, I have nothing. But I told her that I will gladly help her in any way if she needed me to.

So, in order to understand the local art scene, we both went around art galleries on the Penang island. We found out that almost all the galleries here leaned towards Contemporary artwork. We did found a couple of colour pencil artwork on exhibition but they were mostly done in abstract and doodling form of art.

After doing all the surveys, Barbara came out with an idea and suggested that we combined our colour pencil artwork and organised a joined exhibition on our own. The idea was fantastic, that way, I do not have to worry about my lack of art pieces. We believed that it will arouse curiosities because we have never seen nor heard any other artists in Penang doing full colour pencil art. In order to bring attention to our ‘planned’ exhibition, she came out with the title “The Fine Art of Colour Pencil” and it has no need for a theme since it is all about the introduction of colour pencil art work.

Now, we need a space! Many galleries at that time were fully booked till the following year because of the GeorgeTown Festival. Even if there were space in the following year, we were unsure whether they are interested in our work.

One day, while I was in TheArtESpace, where I sometimes goes in to mingle and chat with fellow members, I told Esther, the owner of of the studio about our plan. She immediately suggested that we used her studio for our exhibition, no charges, no nothing, utilised it whichever way we both deemed fit!!!!

We found an angel…..

After we all have decided on the dates and number of art pieces to be displayed, things got moving along pretty fast. That was somewhere around in June 2014.

Firstly, we need to get all the exhibit artwork framed, with our combined 30 pieces, it will take about a month to be done. Thanks to Artbug, the Art & Frame Specialist http://www.artbug.biz/, who did an amazing job. Artbug is also our giclee and canvas print specialist. Not only they did the frames and prints for us, they also helped us to transport all our framed art pieces to and fro the studio during the exhibition.

Thank goodness for technology! Barbara and I liaised through emails and whats app to get things going because we both were living in different corner of the island.

We got the ball rolling by designing and writing our own flyers, got it printed by Vivian http://vividsgn.com/ who did a beautiful job. Once we received the flyers, we both went around town and started to distribute them to galleries, art supply stores, bookshops etc. It was hard work, walking about in town under the scorching sun and wondering whether people give two hoots about our exhibition.

Meanwhile,  in our individual time, we kept searching and approaching multimedia on social network to help promote our exhibition. Writing emails after emails to people who are in the local art scene. We were lucky that people here are rather friendly and obliging. A few of my lovely friends went all out to help us get our exhibition ‘announced’/advertised on the social media.

The thought of approaching Faber-Castell Malaysia had never crossed our minds. I happened to go to the mall one weekend and I came by the Faber-Castell boutique. Suddenly, the thought hit me, why don’t I try and talk to the Manager about the exhibition and see what Faber-Castell can do to support us in any way. I am not asking in monetary form but something small like putting up their stunning limited edition set for display during the exhibition. It seemed befitting because we both mainly uses their product in our work and it will also show that we use high quality products to produce our art. What more, this exhibition is all about introducing and promoting colour pencil art.

We could not have asked for more, to have the support of this giant company was a dream. Not only that, we both received the 120 Polychromos colour pencil (No, not the limited edition set!) and 36 Albrecht Durer watercolour pencil set EACH as a token of their appreciation to us for using their product! It was one of the very nice thing that happened in this exhibition. 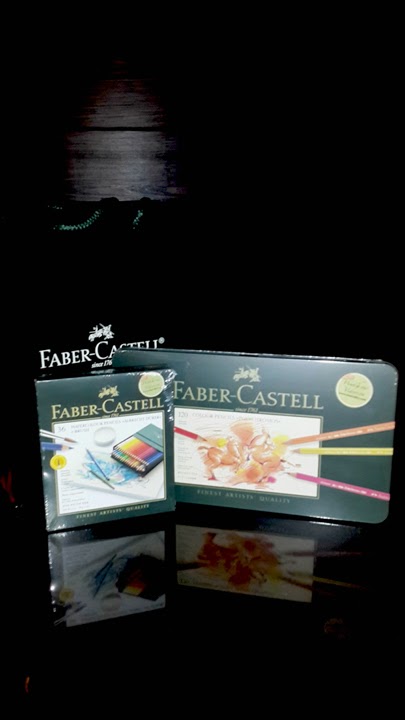 As the time of the exhibition got closer, I was almost a wrecked. I hardly ate and slept. My head is full of ‘what if’! The minute I fell asleep, I will be jolted up with nightmares of everything that could go wrong. The worst nightmare was when I dreamt that I missed my own opening of the exhibition! Shot up straight from the bed right in the middle of the night!!

Barbara was cool as cucumber, she kept telling me to chill and relax, thank goodness for her.

The opening of the exhibition was set on the 22nd, Saturday evening. We wanted to keep things light and casual. We want people to feel at ease and mingle about. Since the time was set in the evening, before dinner time, we felt that light, sweet and savoury bite bits will be perfect to go with some juices, red or white wines. 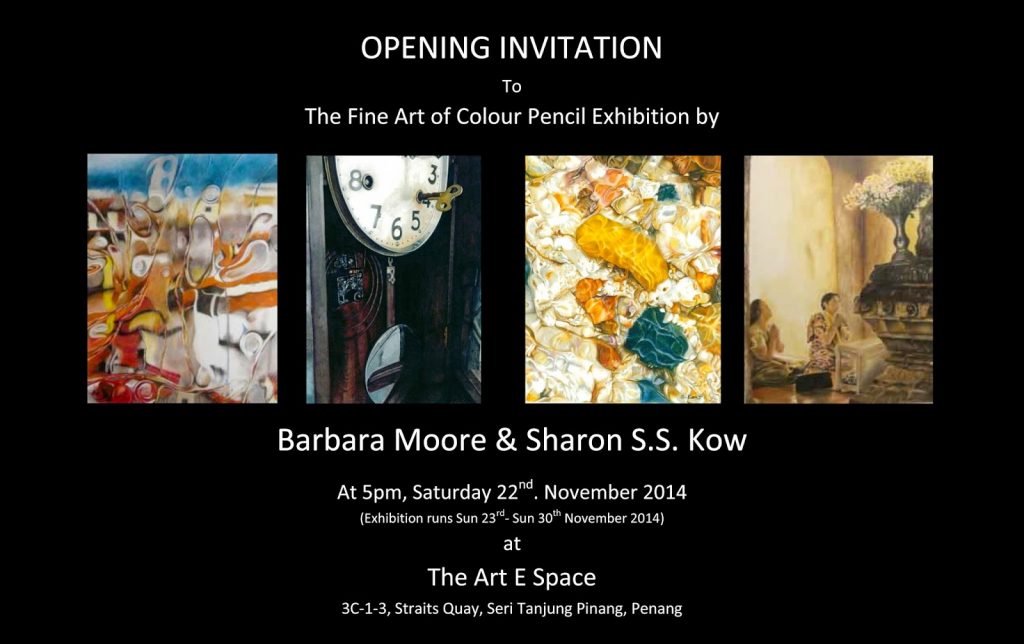 The invitations were sent out to close friends, family, people from the local art scene and also members of the studio. We kept our fingers crossed and hope that people will turn up for the opening. It was a very stressful time for me.

Friday noon, a day before the opening, Barbara roped in Mike, her wonderful husband, Esther and I began setting up the exhibition space. Everything looked excellent and we all went home keeping our fingers crossed. 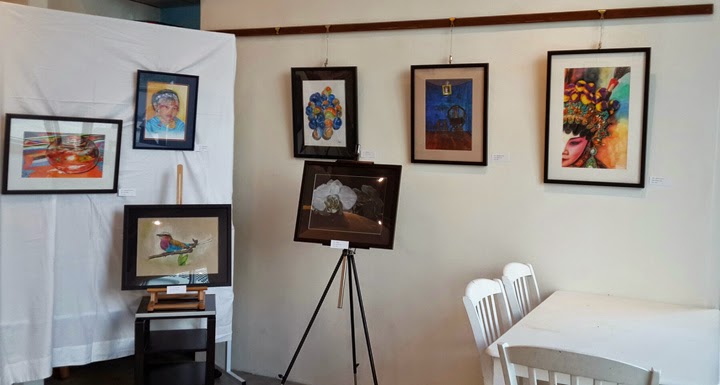 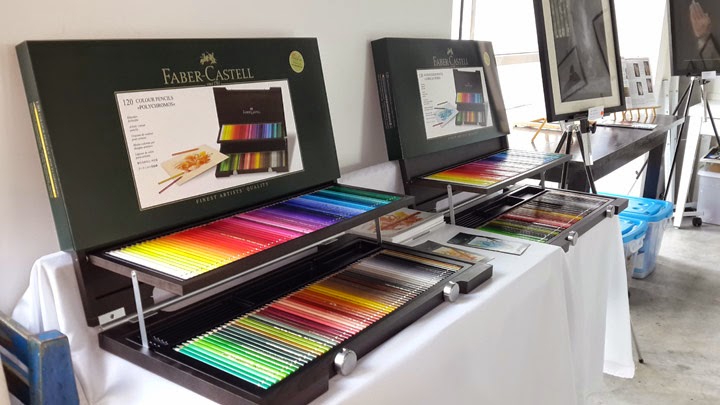 The night before the opening, I got no sleep at all. But on the day itself, I told myself that whatever needed to be done was done, no point worrying myself sick and ruin the evening. So with confidence back a little, I got prepared and left the house by 3:00pm, 2 hours before the opening. 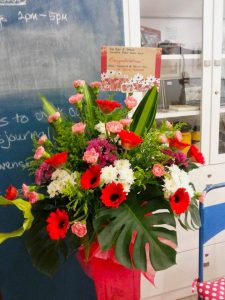 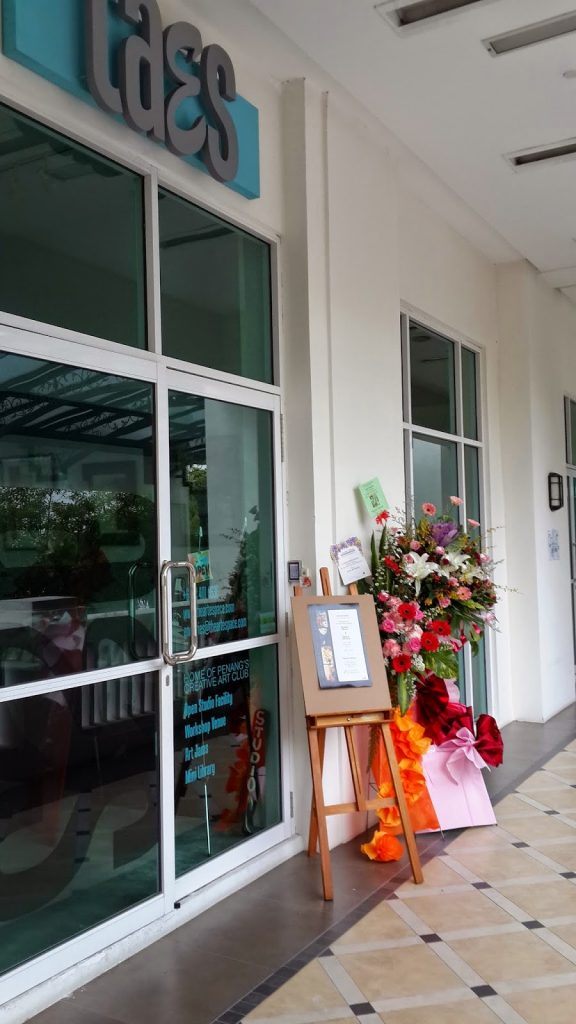 Lo and behold, I could not believe what greeted my eyes when I arrived at the studio! Beautiful, sweet smelling flowers! People actually send flowers! I really could not believed it. All my doubts sort of drifted away.

We wasted no time and started to prepare the final setting for the evening. We hired my daughter and her friend for the evening to take care of the food and drinks so that we could be free to mingle. The crowd started to come in by 5:30pm, and by 6:00pm, it was a full house!!! I cannot believe it, everywhere I turned, I see people in every corner. I could not find Barbara in the crowd. We could not even talk to each other the whole evening because everyone came and congratulated us and we were kept busy entertaining and explaining our work to them. 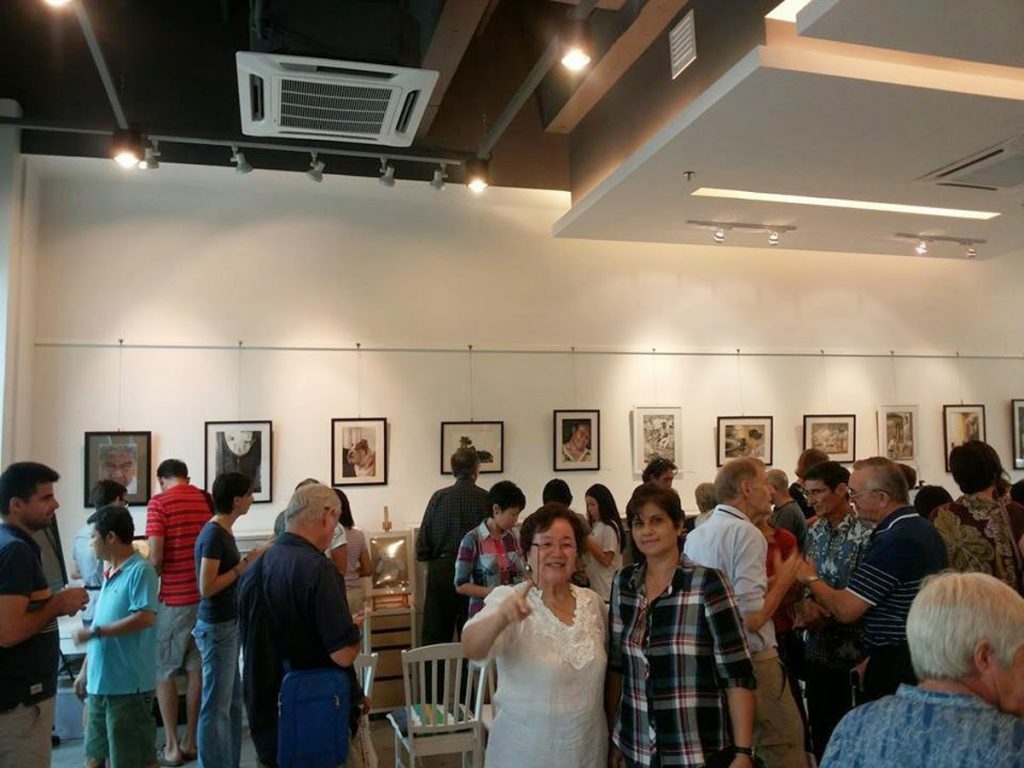 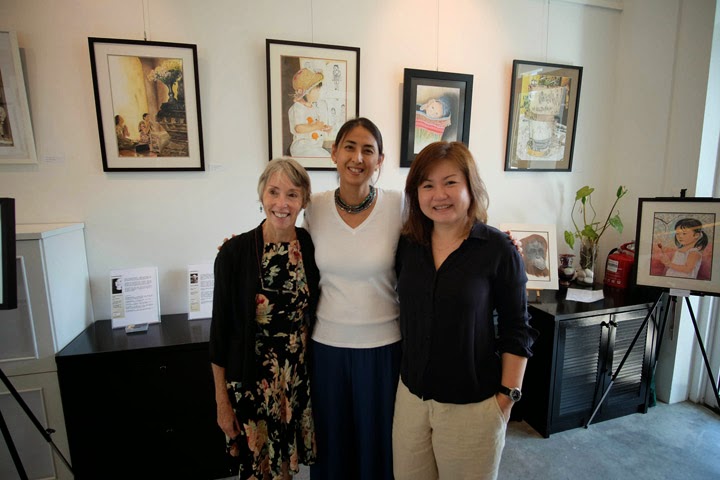 From left to right. Barbara Moore, Esther Geh and myself.

The opening was such a success beyond belief! I could not believe the exceptional responds we received from our friends and family. I was almost touched to tears. The only person I truly missed having that evening was my dear father, how I wish he was still with us and be there to witness the event.

Speaking of tears, I have to mention this incident that I would never ever forget for the rest of my life. This had something to do with my late father.

While I was mingling about explaining my art to a few people, I noticed this acquaintance of mine whom I have invited was all alone, she kept going to and fro in front of my father’s portrait, looking lost.  I quickly excused myself and approached her, thanking her for coming and asking her thought about my work.

She held my hands and her fingers were cold, she looked a bit distraught. Seeing this, I was worried and asked her whether everything were alright. She looked at me and told me that she tried to take a closer look at the details of my father’s portrait. She tried doing it three times, by  walking away and back but still could not look straight into his eyes.

She was tearing up while she was telling me this, I was shocked and puzzled.  I told her that it was alright to say anything on her mind, I asked her why, was the painting too scary or too ugly, just tell me, I am open to any comments. She shook her head and said no and tears just came rolling down her cheeks!! She told me that she felt overcome by such overwhelming emotion when she tried looking into my father’s eyes, she just could not explain why. At that moment, I was so touched and that I too, was almost crying. I felt what she felt when we hugged each other. I truly believe at that moment, my father was there with me.

The evening ended early, everything went on smoothly. I was so tired physically but mentally I was wide awake. The unexpected responds and the strange incident was so overwhelming in a very good way.

Throughout that one week of the exhibition, we had people coming in consistently, curious about colour pencil art. We had artists scrutinising our work, asking a lot of constructive questions which we both thoroughly enjoyed discussing with.

We had parents who brought their kids thinking that it was one of those colour pencil artwork which promotes colour pencils but instead they, the parents ended up engrossed looking at our work and asking questions while their kids were forgotten.

We had people in awed with what colour pencil could produced and received good feedback and encouragements from many of them.

All and all, we have succeeded in our goal to introduce the fine art of colour pencil. All the hard work and stress that we have gone through was well worth it.

The experience of organising an art exhibition is not an easy task. We were lucky that we were able to keep to the minimal cost because of supportive friends. Apart from that, there were also disappointments and stress that came with the whole package. I don’t think I am up to another exhibition in the near future. The mental stress is not something that I enjoyed.  I think I just stick to painting and maybe, in future, just get someone to sell my work. Yeah, that’s it!