And then, I whispered these words whenever we are snacking, very softly... "You want some?" And lo and behold..... that one eye magically peeled opened.... 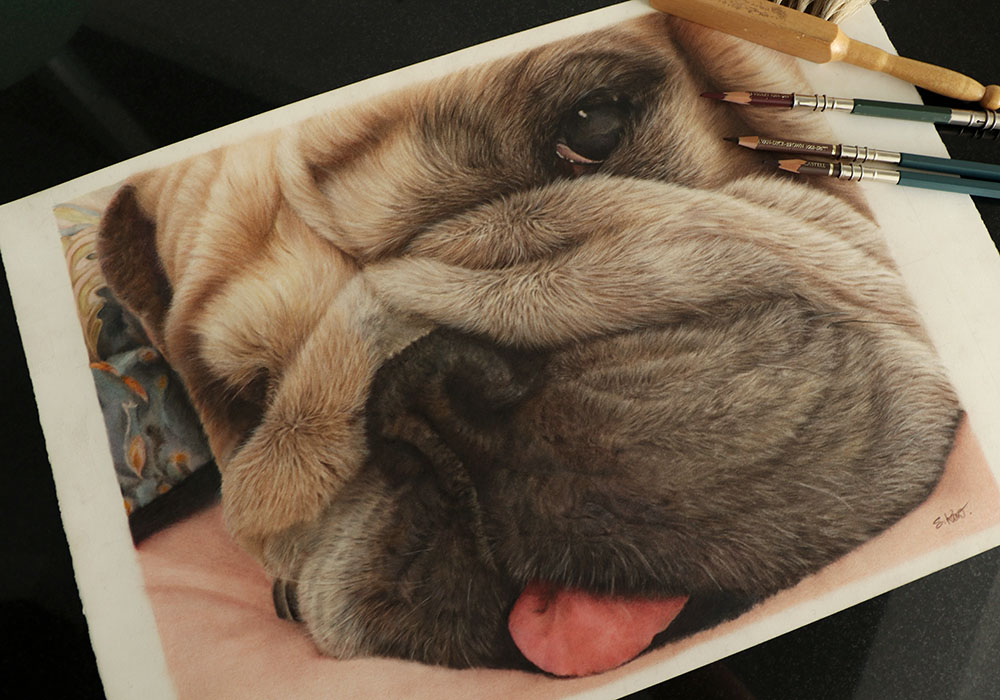 This is very typical of a bulldog when there is food. Just say that magic word “You want some?” and voila! No matter how sleepy they are, that eye, will light up as clear as day!!

It has been ages since I did any dog portrait. My very first bulldog portrait was of Spike back in 2013 as a practice piece. He was our very first English Bulldog. As for Sugar, I did her portrait in 2014, which is a much proper piece of art as I get the hang of the medium.

We have 3 English Bulldogs but sadly, Spike and Sugar have crossed over the rainbow bridge during the Covid lock down. Spike in 2020 and Sugar, just last year. It was a very heart wrenching couple of years for all of us in the family. Today, the only surviving bulldog of the three is Ginger. She is soon to be 10 years of age and is now 90% blind in both eyes. Apart from that, for an old gal, she is doing pretty fine.

My daughter has been bugging me for years to do Ginger’s portrait. I kept putting it on hold because of various commitments and finally, this year, I made time to work on it.

I thought it will be a breeze to do her portrait, since I have previously done a couple of them. And boy, I was so wrong…

I was so confident that I could complete the whole piece in three weeks’ time. But then, as I worked on it, I realised that it was way more challenging compared to the two. This is because the colour of Ginger’s furs are not as defined as the other two. This took me exactly six weeks to complete.

The actual piece is not as large as it looks. It is the composition that made it look gigantic. If I were to do as how I did with Sugar’s portrait, drawing out every little fur, I think I would not be able to complete it till forever.

But then again, it is very typical of me to prefer odd angles cropped and composition, especially with the English Bulldogs. They are adorable with those folds and wrinkles, no doubt about it, but I wanted more. I want their individual characters to show through the portraits, not merely the cuteness.

I took the photo of her while she was asleep in my daughter’s bed (Yup, you read right. They all own the human sized beds, not us). Tried to wake her up but well, bulldog being a bulldog, stubborn like nobody’s business, she just refused to budge.

And then, I whispered these words whenever we are snacking, very softly… “You want some?” And lo and behold….. that one eye magically peeled opened….

And that is Ginger, have food, all is good. Typical English Bulldog……