Don't know why, I have always been fascinated by this 'mysterious' machine. Every time I see one, I could not resist studying and caressing it, wondering about the person who used it and what did he or she typed on it, my mind will go into imagination overdrive. 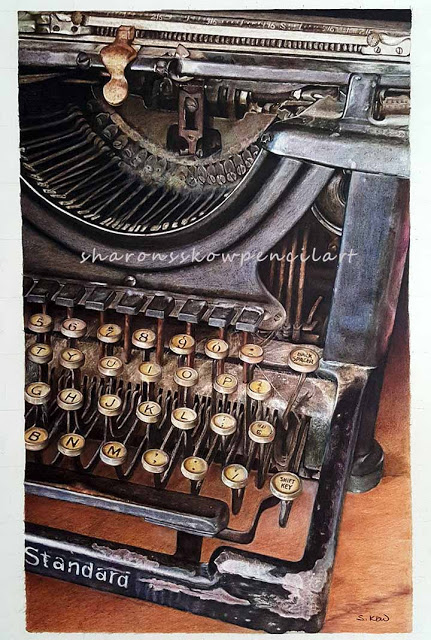 I grew up in a time where the use of these manual typewriters were slowly being replaced by the electric ones. By the time I was working, they were considered antiques.

Don’t know why, I have always been fascinated by this ‘mysterious’ machine. Every time I see one, I could not resist studying and caressing it, wondering about the person who used it and what did he or she typed on it, my mind will go into imagination overdrive.

I came across this antique typewriter during my trip to the United States last year. It is  a Remington Standard own by an artist friend of mine, Dianne Peters Gruber, who lives in Glenn Rose, Texas with her husband Pete. I was very fortunate to be invited by her to live in their house for the duration of my trip there. 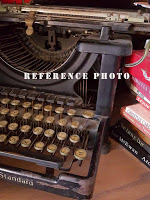 I had only noticed the typewriter a day before I left.  It was sitting quietly, partially hidden on a book shelf at the living room area. I was sitting, relaxing and chatting with Dianne when I realised something kept distracting me at the corner of my eyes. I looked but thought nothing of it.  It happened a few times, something inside me kept telling me to look again…. and I did. This time I took a long hard look and I visualised a painting. I, of course, asked Dianne for her permission to take a couple photos of it and she happily permits and proceeded to clear the space and dusting it. I stopped her and said that it is perfect as it is. To me, the rust, cobwebs and dust adds character to it, the painting itself will relay to whomever is looking, my sentiment about these old typewriters.

I was very eager to start working on it the minute I got home but because of my previous commitments with other work, it had to wait until February 2016. It took me approximately about 3 weeks to complete the whole piece. I took my time with it because I want to enjoy the process. Every steel parts, every chips and every cobwebs was a challenge but exciting to work on. In fact, it was not as difficult as I thought it would be. Not easy,  but not too difficult.  I used one of my favourite paper, 300gsm(140lbs) hot pressed, Lanaquarelle watercolour paper. My favourite coloured pencils, Faber-Castell Polychromos. And my must have tool,  Derwent Blender pencil, battery operated eraser and Tombow Mono Zero eraser. 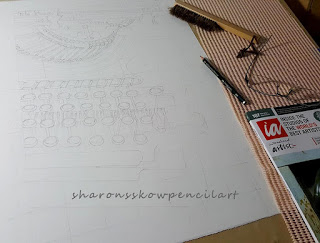 I began the process by doing the grid and line drawing using the Faber-Castell 2B graphite pencil. That took me 2 days because of the perfectionist in me. I have to keep telling myself that the line drawing are only as a guideline and stop wasting time fussing over it. 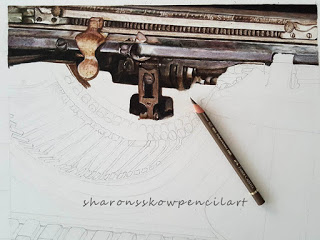 I started with the metal part on top of the typewriter. As you can see, there are numbers on the margin scale. I wanted to be precise and count the dots but I knew that it will drive me nuts. Then I realised, I do not need to be so precise, I just need to play with the values (light and shadow) and that will trick the eyes into seeing the necessary parts. Once I got that in my head, it was not too bad. 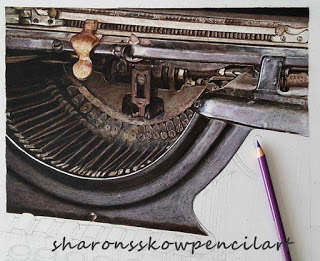 The most interesting part among all was the cobwebs on the type-bar fork, it was in fact, fun to do it and I love the result. 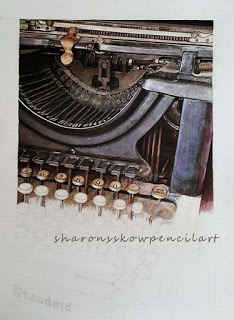 Then, came the metal surface. It has a lot of colours going on, I see Purple, Indigo Blue, Maroon, Grass Green, Cold Grey… so many. I have to really blend all the colours to get that dull iridescent look. There was a whole lot of blending. The chipped off metal parts was very interesting, I see some pink in it. I was trying to figure out why it had so many colours and then recalled that a stack of colourful books were beside it when I took the photo and I have cropped it out. The good thing about the reflection of the colours was that it lend a warm glow to a somewhat dull machine. 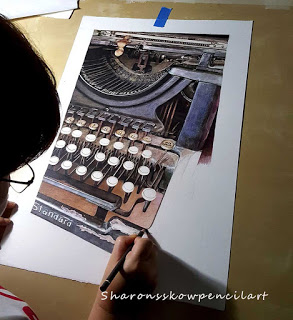 The next step was my most feared, the keys. Because of the angle, it was slightly off-centered and this made the key shape slightly oval. The funny thing was, I tried using a small coin to trace out the shape and it turned out horrible! After sweating over it, decided to use a ruler and draw 2 lines, above and below on each row, and drew rough imperfect circles. I can tell you I was really sweating while working on it.  I did the first row and I sensed disaster if I kept going. WHY? because what if I completed all the keys and at the end, it was crooked or out of alignment? I don’t think I will be able to save it by erasing everything. No way! This was the part where I almost gave up entirely.

So, after studying and thinking of a solution, I decided that it was wiser to complete the metal frame and the base first, then only I go back to the keys. I posted the work in progress and shared my worries in a colored pencil art group on Facebook, and another artist friend of mine, Noriko DeWitt,  suggested the same thing. It is good to have  an opinion from someone who see and think alike. 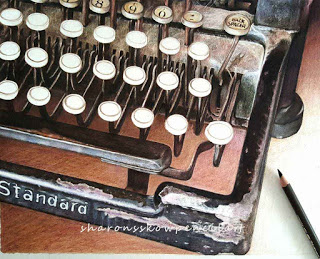 I went on and complete the frame and the base, refusing to look and worry about the keys. I actually took longer time to complete the frame because I do not want to face the fear of working on the keys, funny but it is true. But, sooner or later, like it or not,  I have to do it.The day when I was working on the keys,  it  felt as though I am sitting for a school exam.  Surprisingly, it took me just 3 hours to do up the first row of alphabet. Hey, I realised that I worried for nothing. It was not that difficult, yes, there were many erasing going on but because of coloured pencil, it is easier to rectify any flaws or mistakes. I think, if I were using wet medium, the whole piece will be torn to pieces.It took me just 1 day, about 6 hours to complete all the keys and I was so relieved. I kept going back to adjust here and there and finally said enough. I signed it and hands off.  I kept seeing flaws and more to add and have to pull myself away from it and spray on the fixative to finalised the painting. Overall, I am quite satisfied with this piece. The reflection of the colourful book covers and the orange brown coloured base warmed up the subject. Instead of cold steel, it gave a sense of warmth and that evokes feeling of nostalgia. After I posted the final piece on social media, many commented that it brought back fond memories, some have used these typewriters in one time or another, some recalled seeing their grandparents/parents working on it. It gave me the satisfaction knowing that my painting meant something to somebody. Surprisingly, I received quite a number of offers from people who are interesting in purchasing this piece and I am truly humbled by their interest in it.It is not for sale at the moment because this will be my entry to the 2016 Colored Pencil Society of America (CPSA) International Exhibition Competition. I pray that it will be selected and if it is, this will be my ticket to earn the signature status this year. Competitions are tough, anything can happen. I am not putting on high hopes, I can only pray and keeping my fingers crossed.