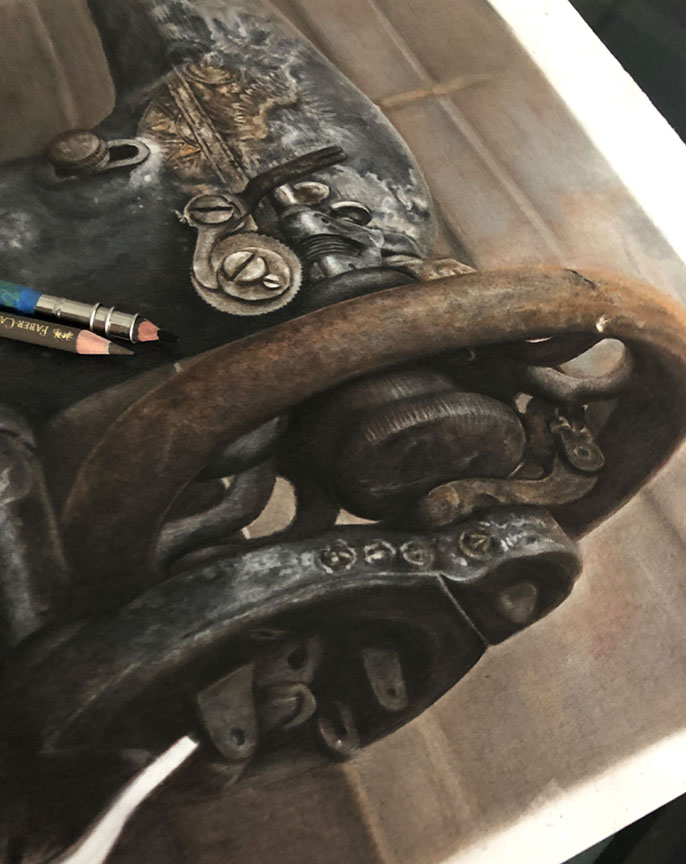 Memory is not just the imprint of the past time upon us; it is the keeper of what is meaningful for our deepest hopes and fears.
–Rollo May

I chance upon this beautiful treasure at a friend’s house. My friend, Pearly Kee, is a homecook coach and author of 3 best selling cookbooks to date. She has appeared on numerous cooking programmes aired throughout Asia, showcasing the best of Nyonya cuisine. Quite a celebrity she is.

I have known her for some time and heard all about her wonderful cooking but never had the chance to try it. So when I received the invite to dine at her house, I was elated!!

While everyone was busy eating, my eyes kept looking towards a mysterious box at a corner. It was a plain, very old wooden box sitting on a small side table. I have been staring at it for quite a while and when finally, all the guests had left, I picked up the courage to ask Pearly about it.

True enough, as I predicted, it was an antique hand crank Singer sewing machine. I got her permission to photograph it and explained that I would love to do a painting of it. She was so kind and generously allowed me to do whatever I wanted to with it. She then stood up and wanted to take a cloth to wipe away the cobwebs but I immediately stopped her. I wanted it to remain as it is because instead of seeing it as an old junk, I saw a story.

Initially, I was attracted by it antiqueness but as I look deeper at the rusts, every scratch and chips of the surface, I felt as though the machine was trying to tell me story. I was so absorbed in that moment, everything surrounded me went blurry and voices were muffled. I knew I found a subject that ‘spoke’ to me.

I knew from the start that I wanted the whole painting to be slightly muted in colour. I want to portray a story instead of just a beautiful painting of an antique sewing machine.

Technical wise, it was quite difficult to control because I was struggling to keep the tone as muted as possible. I could easily work on making it look as striking as possible but then, it will lose the ‘feel’ that I am trying to portray.

Finding the right title was tough. I received quite a number of suggestions from my peers. For instance, ‘A stitch at a time’ came up a few times. It was good but just not enough to express my thoughts.

She learned to sew with that very same machine and it was one of the most important tools during her growing up years. From patching up tears and sewing up new trends of clothes, everything. It is no wonder that this particular machine is something she holds dear to her heart.

After listening to Pearly’s story and also, after much research on many poems and quotes, I decided to go with “Keeper of Memories”. I do not want a title that is too sad or straight forward, common.