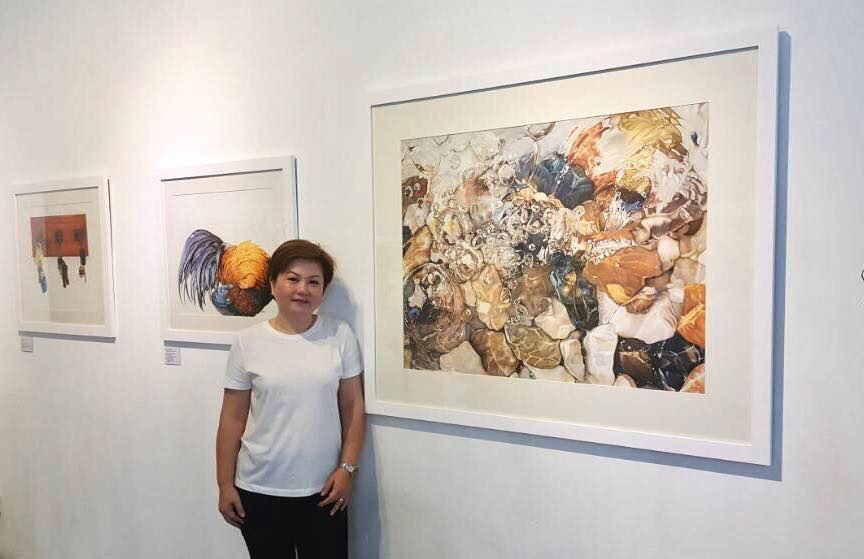 I had totally forgotten about writing a blog on this one, how could I?? This was done way back in September 2016.

How large could I work with colour pencil? Never thought of it before and that got me thinking. To my ability, I figured that the largest I could go is about 40 x 30 inches max.

As for the subject, it needed to be something simple without too many detailed work. It could not be just a pretty painting, it has to have some substance to it. I was quite obsessed with rock pebbles at that time and naturally it became the perfect subject.

I went around for several days, to the beach and waterfalls, to get inspirations. But it was all in vain.  It was when I was almost at my wits end that a sudden image of rock pebbles in water with bubbles ‘appeared’ in my head. And I knew just what to do. 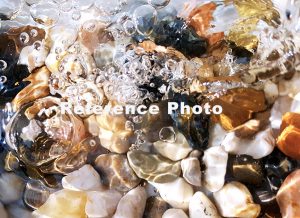 I collected several river pebbles that I have around my house compound and put them all in a white enamel soup bowl.  Armed with my

camera, I went out to my garden and placed it on the ground. One hand holding the garden hose with running water and the other gripping the camera, start taking many many shots of at it. 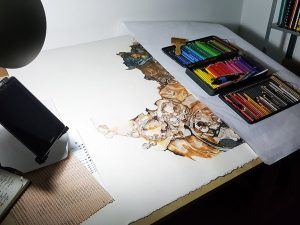 It took almost an hour under the blazing afternoon sun to get that perfect shot and by the time I was done, I was drenched in perspirations mixed with water splashed from the hose.

I was looking forward to work on it as soon as I could. Surprisingly, I was not at all intimidated by the challenge ahead. 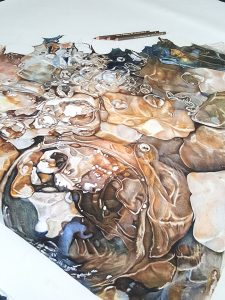 Since these are rock pebbles, I was not worried about getting the precise shapes or details. My main focus was the colours and value.

It was to be a semi-abstract kind of work. The process was quite tedious because of its size. Lots of pencils were used.  Every once in a while, I have to tape it up the wall and inspect it from a distance. 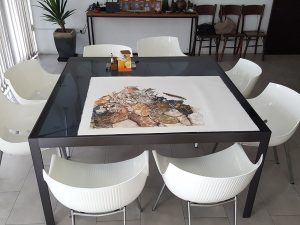 The reason for doing that was to make sure that every section was in a perfect flow.

It took me two and a half months to complete. I have to be extremely disciplined, waking up at 6am, did all the house chores and started working from 10 am till 6pm, 6 days a week.

It was extremely tiring, both body and mind but it was worth it. 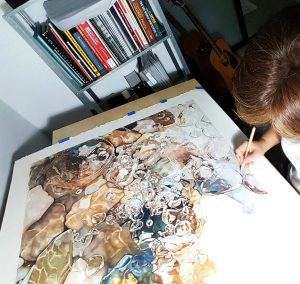 A state which opposing forces or influences are balance, a calm state of mind.  Which is exactly what I am relaying in this piece of artwork. Everything has to have a balance.

This was by far, my largest piece of coloured pencil artwork to-date. Will I be doing another one as large as this in the near future? Well, not at this moment, but

then, who knows? When the urge to torture myself come lurking by again. 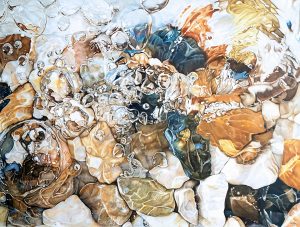