look what a haughty expression he gave 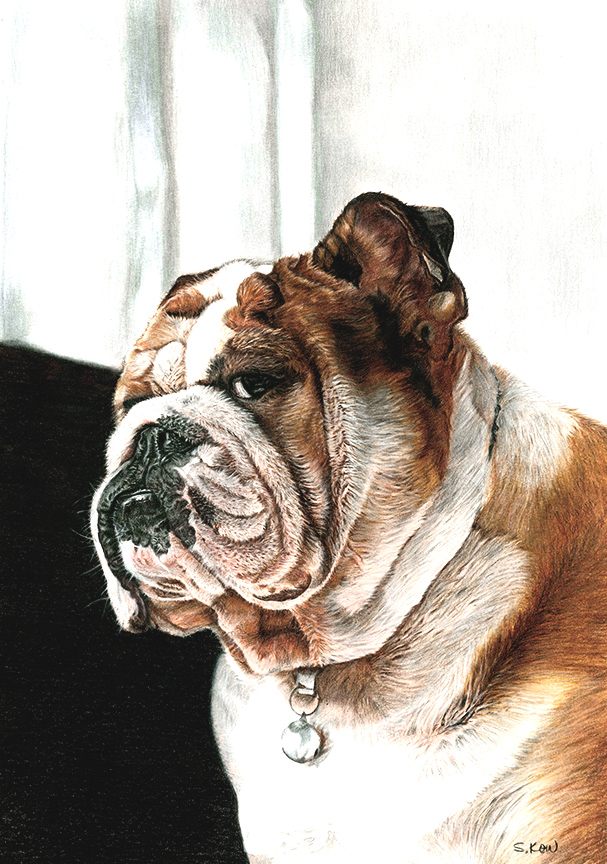 I just could not resist painting this guy. He with his many looks & moods.

This photo was taken by my daughter when Spike (yes, Mr. Macho’s name), just woke up from a nap. She aimed the camera at him and look what a haughty expression he gave! Didn’t even flinch, a “I don’t give a damn” attitude. That’s a real bully (short for Bulldog).

I did my first portrait of him back in early 2013. You can see the difference in the details. As I have only started to pick up coloured pencils in March 2013, so Spike, the bully, turned out not too bad. It won me the votes from Colored Pencil Artists & Lovers on Facebook for the August 2013 challenge, winner of the beginner category. Something I’m so proud of. And to add to that, I’ve also won a set of beautiful 48 Bruynzeel design coloured pencils plus Canson’s Mi-Teintes Touch sanded paper block.!!

I started with the usual grid lines. First, I print out the reference photo to a A4 size. Get the tracing paper (A4) and drew on the 1x 1 inch grid and put it on the reference picture. 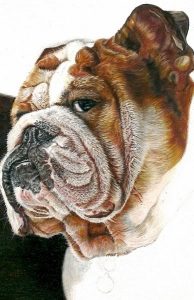 For this painting, I’ve used A3, 220gm, Daler Rowney heavyweight cartridge acid free paper. It has a tinge of yellow but it doesn’t bother me as it’ll be covered with colours. I drew a 1.3×1.3inch gridlines (very lightly) on it to blow up the subject. I then proceeded to sketch on it, making sure I get all the right proportions. The important parts are the eye, nose and mouth, or else it’ll turned out looking like anything but Spike!

Immediately, I started to work with coloured pencils on the eye. I always start my painting with the main focus point, especially portraits, always start with the eyes. Can’t be doing everything and the eyes last, it could be a disaster. For this, I used Faber-Castell Polychromos coloured pencils, which are oil based. They are not flaky nor chalky and are a joy to work with.

I don’t bother with the details yet, just need to get the colours combinations right. As it is getting into the shape I wanted, I then started to add some small detailing on it and work further on it. And it goes on for the rest of the painting.

Now, what happened? It’s the case of carelessness! I’d misjudged the proportion!. No sweat, I told myself. I’ve the model here with me, LUCKILY! (Lesson learned, don’t only focused on the eye, focus also the whole subject matter!)

So, called Spike over and start studying his coat colours and paint from it. Well, sometimes, we need to adjust and be flexible in any situations. Don’t fret, keep calm and all will come to light (keep telling myself that)!

I added the background halfway so as to bring out the main subject. This is because I’m working on white surface. Oh, background is a piece of cake! But mind you, it’s not only pure dark brown I have there, there’s some red and purple going on to bring out the darkness of it. Pure black will be very flat and yucky. That’s what I’ve learned through researches.

So, after I had on all the right colours and compositions. I started on the finer detailings. To bring our the whites are tough as I don’t like using mixed media, such as ink or paint. I like to keep my work 100% coloured pencils. I’d used Derwent-Drawing range coloured pencils, Chinese white, which is super pure white. Faber Castell whites have a tinge of cream in it, so it doesn’t pop out.

And here you have it. My darling boy Spike! I’m very happy with this work as I love super detailing. Some people may not fancy it because they think that might as well take a photograph rather than paint it like a picture. But hey! Who’s to argue with it? One man’s meat another man’s poison! 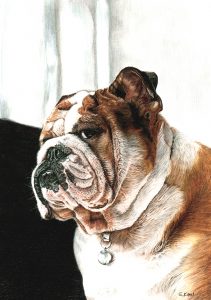