To Have and To Hold… 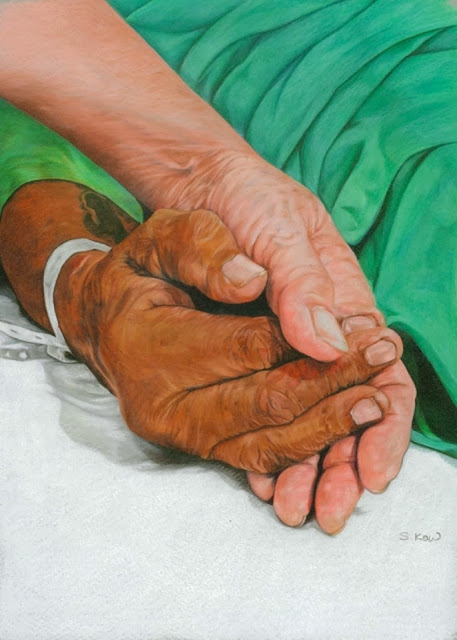 How would I know that this will be the last time that my dear father would pose for me….

Not long after I finished up this piece, he passed away. He never left the hospital, after a month and half stay. It’s a consolation to me that he saw this finished piece and he said that he’s amazed that I could paint his hand exactly like his plus the tattoo too, that remark meant so much for me and I know that he’s proud that I possessed his talent for art, which he had taught and encouraged me since I was in my early teens.

I had the inspiration to do a series of paintings depicting hands of various ages and poses since I started my coloured pencil paintings. The idea was shelved because I could not get good referrals. I want it to be my own composition rather than taking other people’s reference pictures. 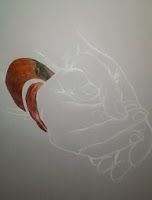 This inspirations came about when I was going to and fro from the hospital, visiting and bringing whatever food he craved for.  I had this vision in my head, doing a painting of both my father and mother. Instead of a portrait, I came up with this idea of a painting only their hands.

I still recall that day when I was all excited to rush to the hospital to get them to pose for me. I took my mobile phone and ‘instructed’ them on various hands’ holding poses. I really was so thrilled that I got the right composition and can’t wait to get home and start painting, which I did. I work on it everyday after every hospital visits and stayed up till wee hours in the morning. I managed to finished it up within 2 weeks. 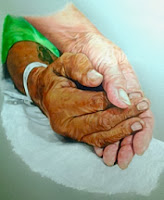 I was prepared to face the painting of hands’ challenge as what I know, it’s one of the most difficult subject to do. Surprisingly, I didn’t feel that it was too difficult. All this could be due to the excitement and knowing that these hands belongs to my parents and no matter how difficult it is, I willed myself to ‘must’ do it! It’s the same feeling I had when I did my father’s’ “funny face” portrait.

Papa, rest in peace, I miss you so much….